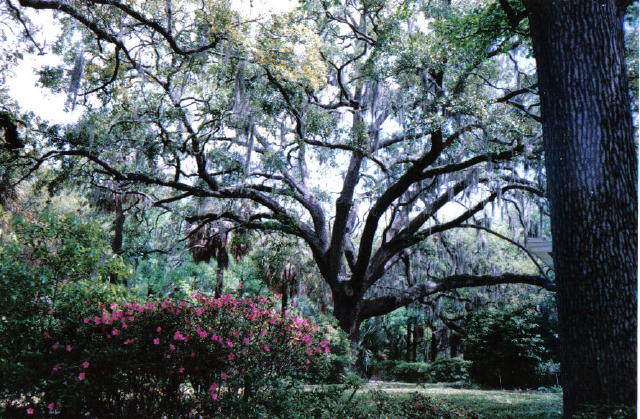 At the age of seven, Byron and his family moved from the Maryland side of Washington, D.C. to his grandfather’s farm near the small south Georgia town of Pembroke. His grandfather owned approximately 2,000 acres of mostly pine forests. Adjoining that land, his uncle owned almost 1,000 acres of woods. This gave Byron 3,000 acres of land in which to play. And he took advantage of that. By himself (he had five sisters), he would often go off for the day and roam across that land. He found himself feeling "at home" in the woods. This affinity for nature, and especially trees, has continued throughout his life. 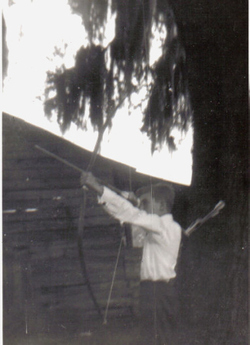 Photo: Byron is pictured here, at age nine, standing on the roots of one of his favorite trees with one of his grandfather’s barns in the background. (He continued his interest in archery until, by the age of twelve, he had gotten rather good and was quite accurate.)

In the middle of the fourth grade, Byron’s family moved to Savannah, Georgia and he continued to live there through high school, graduating from Savannah High School.

Photo: The first day of school in the 6th grade at Eli Whitney Elementary School in Savannah, Georgia. (Notice the tree behind Byron.)
Byron spent four years at The University of Georgia in Athens, Georgia (all classes were uphill). He was graduated with a B.S.Ed. degree in History. After teaching two years, he began work on his M.Ed. and was appointed the youngest full Principal of a school in modern Georgia school history. The school had kindergarten through grade eight. At the end of the school year, Byron resigned that position to work full time on his Master’s degree. When he finished that, he began work on his Ed.S. degree. He earned both those degrees from Georgia Southern University in Statesboro, Georgia. While he was at it, he applied for and was accepted to the Ph.D. program at George Peabody College in Nashville, Tennessee. After two years there, he was awarded his doctorate in Educational Administration and Supervision. 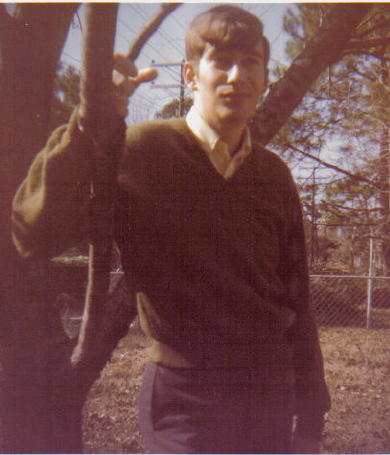 Photo: Byron is pictured Here just prior to beginning his first teaching position. He taught five classes of 9th grade Geography. (Notice the trees.)
While at UGA, Byron got a scuba diving license. While working on his Specialist degree at GSU, he got a private pilot’s license and joined a flying club. Before beginning his work on the Ph.D., Byron got married. A lot of things were going on and that is the way Byron likes it.

Over the years, Byron worked as a Director of Schools, a college professor, teaching both undergraduate and graduate courses, a newspaper owner (The Smoky Mountain News) and later, a newspaper editor. After 15 and a half years, at the end of 2021, Byron retired as the Vice President for Academic Affairs at Nossi College of Art in Nashville, Tennessee.  Byron believes in the importance of volunteering in one’s community. He has done much in this regard including serving as President of his local Kiwanis Club. Byron has performed in numerous community theatre productions and several television commercials.

Byron never expected to marry again. However, Cupid had different plans. Byron met and fell in love with his best friend. The "Keeper of the Stars" put those two together, and they were married in June 2001.  Staying with their love of nature, the couple was married outdoors in a park. Today, they live on over a hundred acres in a hardwood forest. Once again, Byron is free to roam among trees.

Even as a young child, Byron had a desire and a drive to learn. He has always been an extremely healthy reader and will read almost any book on almost any subject. His interests are extremely varied and he pursues knowledge for the sake of knowledge. Byron is acutely aware that there is no end to the learning process. He is always excited and thrilled to learn something new and knows that that excitement will continue throughout his lifetime and right through the dying process.

Mentioning dying reminds me that Byron once said that he was not at all afraid of death. He told me that, with the presence of the Holy Spirit in his life, he knows that he has no reason to fear dying. Byron said that every single one of us has a physical body that is going to die. He continued by saying that every single one of us has a soul that will not die . . . but will live forever. Each of us alive today has a soul that will be "somewhere" 200 years from now, a 1,000 years from now, 100,000 years from now. Byron quotes the question Jesus asked, "What shall it profit a man, if he shall gain the whole world and lose his own soul?" All of our souls are eternal. When the physical body dies, the soul continues. Byron said that, with his belief in Jesus, he knows where his soul will go. That is why he has no fear of death.

Writing is something that has always come fairly natural to Byron. For Byron, one of the most difficult aspects of writing is deciding upon a topic. Once a topic is decided, then comes the creative process of developing it into a story that people will enjoy reading and yet will still get the topic across. For Byron, this is pretty much all a mental process. When that is completed, then the hard work of actually putting it down on paper begins. When a book is finished, it is a new creation. It is something different that now exists in the world. When any author completes a book, he has the satisfaction of knowing that he has produced something unique. 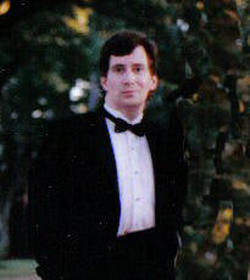 Photo: This photo was used on the cover of Byron's novel, Dawn.  In this photo, Byron is surrounded by dozens of ancient oak trees.
Byron Edwards, Author